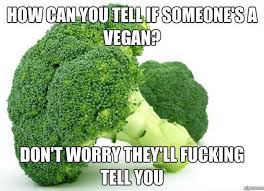 Ask any meat-eater and they will tell you stories about vegetarians telling them how to eat and live their lives, etc. etc. Conversely, ask any vegetarian (vegan, pescatarian …) and they will have a list for you of things meat-eaters always say to them. Let me tell you, I am skeptical about what meat-eaters are saying, as I have never seen or experienced this. If anything, I have had far more trouble with meat-eaters. Look it up. I am not the first to write about this, nor am I the last. Everyone wants others to be like them for various reasons and if not, it is not well taken, especially if you do not fit the norm. People love saying that what you eat is a personal choice, but is it really?

This is where you are asking yourself why I would say that. Let us take our time on this and start globally. You may know that many vegetarians are environmentalists and that this influences their decision; in fact, I first cut out meat for environmental reasons. Other animals were around before humans, agriculture is estimated to have begun around 10 000 years ago and we began to domesticate animals a few thousand years prior. Farming practices changed minimally until the 20th century. Farming practices changed significantly, resulting in factory farming; and who knows where we will be by the end of this century! 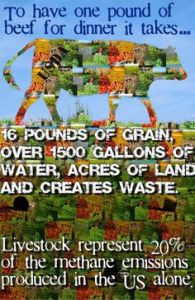 Cows, for example, are raised on plots of land packed with so many that there is little room for movement. Because of this, there is no sunlight reaching the ground for plant growth, which couldn’t grow anyways because of the constant movement; natural erosive processes do not need to occur with this kind of degradation. Large plots of land are needed to grow the grains used to feed the cows, plus all the resources used to grow said food – monocrops covered with pesticides and fertilizers, filling the ground with these chemicals and depleting them of the nutrients used by said grains.

Many choose to cut meat out of their diet for ethical reasons. This may sound pretentious, but animals are often fed the wrong foods to fatten them up, getting them sick more frequently, meaning they are given various drugs; genetic modification (GM) further increases their rapid weight gain; living conditions cause fear and stress throughout their lifetimes. There is a reason the term factory farming exists. Animals are subjected to terrifying procedures, such as cows being separated from their mothers at birth, chickens beaks being cut off, “free range” chickens living in worse conditions than caged chickens, and more. 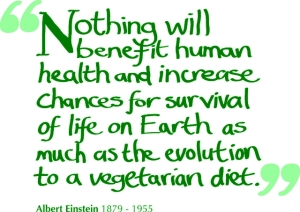 One of the biggest reasons I am still a vegetarian is the impacts on health. Starting with what I mentioned above, include reasons such as, animals being fed the wrong foods means the nutrient value decreases, illness and drugs decrease the quality of meat, as do fear and stress. While the meat industry wants us to believe GM is safe, it has not existed long enough to truly know (and this goes for any GM food, not just animal products). Anyone eating GM foods is partaking in a mass science experiment that has the potential to have dire consequences – and sadly, there are times when it can be difficult to even know! Funny how many people fear studies approved by ethics boards, but knowingly partake in this study?

That is not all! What about the fact that meat consumption statistics in Canada put meat consumption anywhere between 1,5 to 2 times recommended amounts (see image for American rates) per capita? This increases the rates of health issues such as heart disease and high cholesterol. This does not include other proteins consumed, which can affect your health in various ways. Then there’s the fact that the average meat-eater is less likely to eat a balanced diet than the average vegetarian – not to say they are not eating healthy foods (though many are not), but healthy food does not equal balanced diet. In my experience, this is true; I did try to get all the food groups in my lunches growing up, but lunch meat with processed cheese (at the time I included dairy as a food group), pre-packaged flavoured apple sauce and trail mix was not a healthy lunch at all. Now, I cook dry legumes, use fresh or frozen vegetables and fruits, eat a variety of grains and minimize the amount of dairy I eat – admittedly easier in Canada than in Ghana. Not every day is perfect and I am always learning more, but my effort is no longer based on a food pyramid with severely limited information, but rather doing my best to have as much balance as possible!

How does this prove that what you eat affects others? In a nutshell:

What you eat is not a personal choice; it affects too many people, but I will not deny that specific food choices are by all means personal. The other day, my parents ate fish and I could not help but to picture my brothers’ reactions whenever I tell them how much meat Canadians eat; the piece my mother ate could have fed at LEAST five young men in Ghana! Meat consumption by the average Canadian needs to be significantly reduced.

Let me know what you think! Cancel reply